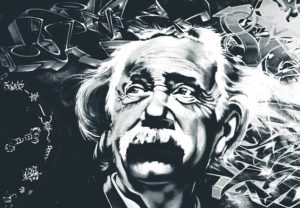 Throughout history, there have been numerous inspirational figures on the autism spectrum. Here are a few of our favorites.

Let’s start with the most famous person on our list. It’s no exaggeration to say that Albert Einstein is the most highly regarded scientist and mathematician in the modern era, and possibly all of history.

Many experts have theorized that he was on the autism spectrum, as he exhibited many telltale signs. As a child, he had a significant speech delay. Well into adulthood, he experienced difficulties with socialization. As you know, he also possessed a profoundly mathematical brain.

But figures on the autism spectrum are renowned for their achievements in non-mathematical fields as well. Many historians believe such writers as Lewis Carroll and Emily Dickinson may have had autism. But one of the most compelling arguments is for the Irish novelist James Joyce.

If you were to ask a group of academics what the greatest novel of the last century is, a fair share of them would probably suggest Joyce’s novel Ulysses. His literary achievements may be beyond the understanding of even the most intelligent of children. But if your child takes an interest in creative writing, they have some of the greatest modern writers to admire.

Pokemon has been exceptionally popular among children for nearly 25 years. The mastermind behind the hit video game and television series, Satoshi Tajiri, is on the autism spectrum. As a child, he was a budding entomologist. His preferred pastime of insect collection and pinning alienated him from his peers. But it ended up inspiring him to create one of the most enduring cultural phenomena in recent decades.

Susan Boyle wowed the world in 2009 when she took to the stage of Britain’s Got Talent in 2009. Her unique and elevated take on operatic pop songs became a worldwide sensation. She later enjoyed tremendous success as a recording artist. Her debut studio album event went on to become the best-selling album of all time in the United Kingdom.

Susan Boyle’s success is a testament to the fact that individuals on the autism spectrum can make extraordinary achievements in any field. Well into her adulthood, around 2012, she learned that she has Asperger syndrome.

These are just a small handful of our favorite inspirational figures on the autism spectrum. Here at the Connections Therapy Center, we will use our proven therapeutic expertise to help unlock your child’s fullest potential. With our help, we know that they can grow up to inspire others as these figures had inspired them.

The Connections Therapy Center serves families of children and adolescents with disabilities and special needs. We are a team of experts in the fields of pediatric speech, occupational therapy, speech-language pathology, and behavioral sciences. As a team, we offer intensive hands-on therapy for children and adolescents, as well as informative and useful resources for families. If you are interested in learning more about what we can do to help your family, visit us online or give us a call at (202) 561-1110 (Washington, D.C. office) or (301) 577-4333 (Lanham office). Want to get more information on how to help your child thrive? Follow us on Facebook, Twitter, LinkedIn, Google+, and Pinterest.

Categories: Blog | Tags: autism, autism spectrum, and inspirational figures
This entry was posted on Thursday, November 5th, 2020 at 12:07 pm . You can follow any responses to this entry through the RSS 2.0 feed. Both comments and pings are currently closed.